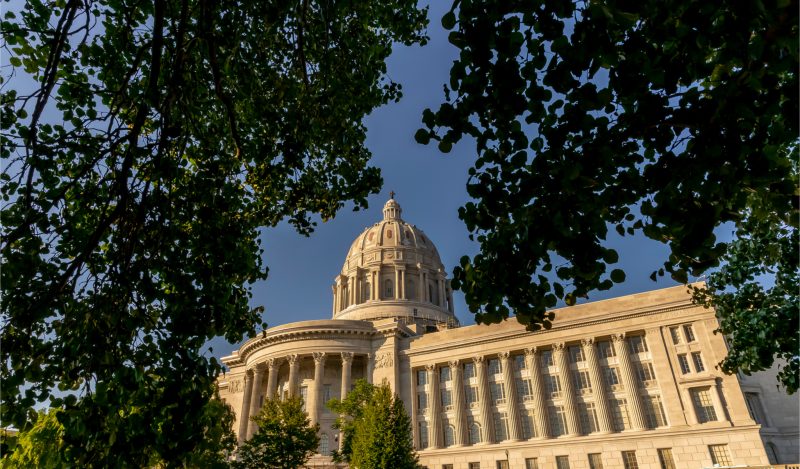 The Circuit Court of Cole County, Missouri, Judge Daniel R. Green presiding, has issued a sweeping judgement against Covid restrictions and mandates imposed by the Department of Health and Senior Services, November 22, 2021. Cole County is located in the center of the state and its largest city is Jefferson City, the state capital.

The decision begins: “This case is about whether Missouri’s Department of Health and Senior Services regulations can abolish representative government in the creation of public health laws, and whether it can authorize closure of a school or assembly based on the unfettered opinion of an unelected official. This Court finds it cannot.”

The case is decided on grounds that the edicts clearly violated the traditional separation of powers between the legislature and the executive. The legislature cannot surrender its power to make law to an unelected bureaucrat, either by constitutional tradition in a Republican form of government or under the Missouri Constitution.

“Separation of powers among the three branches of government – legislative, administrative, judicial – is fundamental to the preservation of liberty. DHSS regulations break our three-branch system of government in ways that a middle school civics student would recognize because they place the creation of orders or laws, and enforcement of those laws, into the hands of an unelected administrative official.”

The court further decided that these edicts violate the equal protection of the laws. The decision is here quoted at length and the PDF embedded below the text.

The authority that the DHSS regulations purport to grant to an administrative official to implement control measures and create and enforce orders is open-ended discretion – a catch-all to permit naked lawmaking by bureaucrats throughout Missouri. The regulations codified at 19 CSR 20-20.040(2)(G) -(I), 19 CSR 20-20.040(6) fail to set forth any standards to guide the DHSS Director or the DHSS-deputized local health agency directors in their creation of orders purporting to prevent the spread of a communicable disease into the state. The state’s enabling act provides no standards for the issuance of orders. Mo. Rev. Stat.§ 192.026. Orders authorized by the regulations are completely within the discretion of the agency official and are limitless, standardless, and lack adequate legislative guidance for their creation. The regulations also fail to provide any procedural safeguards for those aggrieved by the orders.The regulations create a system of statewide health governance that enables unelected officials to become accountable to no one. Authorizing necessary, or appropriate, or adequate orders does not set forth the required standard or guideline for the administrative official.

Plaintiffs produced ample evidence that health agency directors throughout Missouri have used the power granted to them by 19 CSR 20-20.040 to exercise unbridled and unfettered personal authority to in effect, legislate. Local health directors have created generally applicable orders, both in writing and verbally, requiring individuals within their jurisdictions to wear masks, limiting gathering sizes in peoples’ own homes, creating capacity restrictions, limiting usage of school and business facilities including tables, desks, and even lockers, mandating spacing between people, ordering students be excluded from school via quarantine and isolation rules created by health directors based on masking or other criteria not adequately set forth in either by the state legislature or by DHSS rules, among other generally applicable orders.

A local health agency director is constitutionally prohibited from exercising discretion to issue generally applicable rules prohibiting or requiring certain conduct and disciplinary consequences for violations of the director’s unilaterally created rules. Yet, this has been happening across the state for over 18 months, thanks to unconstitutional language buried in state Regulations. DHSS regulations that permit an agency health director to create and enforce orders and take other discretionary “control measures,” which are predominantly set forth in 19 CSR 20-20.040(2) (G)-(1) and (6), are unconstitutional and are therefore invalid….

Schools and places of public assemblies should no longer fear arbitrary closure based on the whims of public health bureaucrats. This system is entirely inconsistent with representative government and separation of powers and makes a mockery of our Missouri Constitution and the concept of separation of powers. The DHSS regulation set forth at 19 CSR 20-20.050(3) is unconstitutional and is therefore invalid.

Throughout 2020 and 2021, Missouri’s residents and businesses have been subjected to orders created and issued by bureaucratic edict outside the constitutionally mandatory legislative process. These orders substantially differ between counties even though COVID-19 is not a county-specific disease. Plaintiffs presented evidence that Missourians have been subjected to unconstitutionally created “health orders” that, for example, prohibit them from leaving their homes located in certain counties except for certain delineated reasons, permit worship services but prohibit Bible study, require churches in some counties to tum people away from their services if fire code capacity reaches 25%, require elementary students to wear masks indoors, even while playing basketball, and prohibited children from giving “high fives.”

Plaintiff Shannon Robinson was not permitted to have people over to her own home, even in masks, even socially distanced, because she has a large family and the number of people would exceed permitted attendance at her own dinner table. When she moved from St. Louis County to Franklin County, she could again have friends over. Restaurants have been unilaterally shut down even without any presence of infection and without inspection based on administratively issued “health orders” that violate the Constitution and have not been promulgated pursuant to the APA’s procedural protections, while restaurants down the street in a neighboring county remain open. Children are removed from schools in some counties but not others, based on different masking rules issued by local health bureaucrats that are unconstitutionally created.

Plaintiffs presented evidence that these orders issued by health agency directors go into effect without public comment, and become effective once posted on the internet. These bureaucratic edicts are for an indefinite duration until they are removed or edited based on the opinion of the bureaucrat who wrote them….

Can it be said that COVID-19 knows to stop at specific county lines and does not travel over? It is completely irrational that, at this point in time, now that COVID-19 has spread across the globe, a first grader in Wildwood is not allowed to play sports, while a first grader in Jefferson County who lives less than a mile away is allowed to do so. Individual freedoms are affected in different ways throughout Missouri relating to the same COVID-19 illness thanks to the DHSS regulations that allow one person to make and enforce laws, and close things down with no standards other than a completely unappealable and unchallengeable “opinion” regarding public health protection. The DHSS regulations permit different treatment across county lines in a manner that is completely arbitrary and violates the equal protection clause of the Missouri Constitution, Mo. CONST. art. II, § 1.

Missouri’s local health authorities have grown accustomed to issuing edicts and coercing compliance. It is far past time for this unconstitutional conduct to stop.