Toe-curling video shows how ‘Sir’ Tony sucked up to murderous Kazakhstan despot Nursultan Nazarbayev in return for £5.3million a year 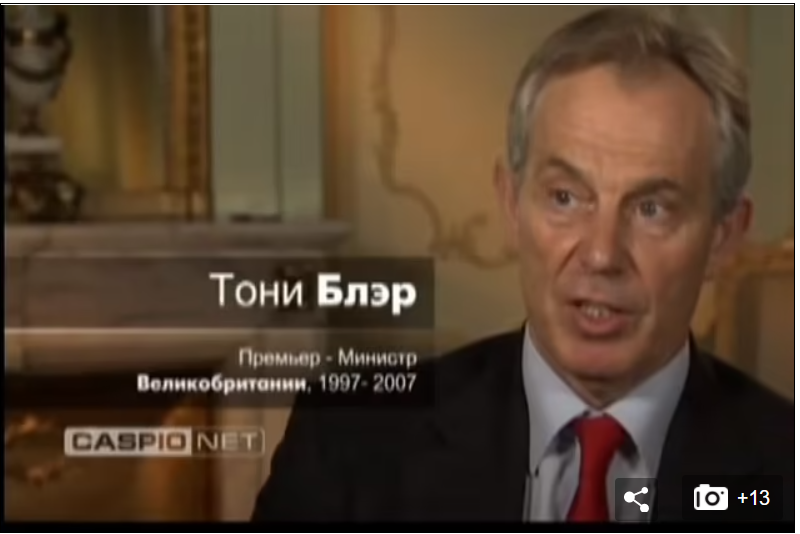 To become a Knight of the Garter, Tony Blair must kneel before the Queen in a ceremonial habit and swear a ‘loyal oath’ while a piece of blue velvet embroidered with gold is fastened to his left leg, just below the knee.

The ceremony at Windsor Castle, scheduled for the second Monday in June, will be followed by a procession in which members of the noble order wear ornate gowns covered in golden tassels and bearing a sparkling St George’s Cross, plus large black hats topped with a plume of giant white ostrich feathers.

It is part of a royal tradition dating back to the 14th century, which involves a large number of Beefeaters, trumpeters and horse-drawn carriages.

Yet Her Majesty won’t be the first head of state to whom ‘Sir’ Tony has genuflected in surreal circumstances.

Back in 2012, our former Prime Minister made an extraordinary appearance in an hour-long documentary called In The Stirrups Of Time, which was produced by the government of Kazakhstan to celebrate its president’s 20th year in office.

The film resembled Soviet-era propaganda. It opens with shots of horses galloping across the steppe, overlaid with harp and piano music, plus endless pictures of the country’s Glorious Leader walking through cornfields, saluting soldiers, hugging peasants, touching the hands of crowds of supporters and standing at sunrise next to Kazakh landmarks.

After two minutes, it cuts to an ornate room in which Tony Blair is sitting next to a fireplace wearing a suit, tie and his multimillionaire’s year-round suntan.

He rattles on about the wonders of Kazakhstan, an ‘almost unique’ country full of ‘really smart people’ who are ‘capable, very determined and very proud of their country’.

Later in the film, after more Kim Jong Un-style PR shots of the president, Blair crops up again to endorse Kazakhstan’s government, boasting: ‘Rather like the leadership in a country like Singapore, they actually decided they were going to take the country, move it forward . . . and they did it!’ 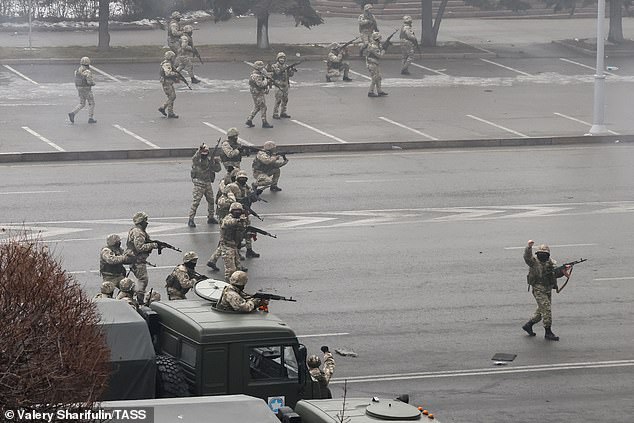 Pictured: Violence in western Kazakhstan this week after protests were sparked by rising fuel prices

In a third appearance, he earnestly waxes lyrical about the ‘extraordinary economic potential’ that had allegedly turned the country into ‘an important player in the world’ with the ability to become ‘a real bastion of stability and progress’.

To the casual viewer, this clunky exercise in PR — which has cropped up in an obscure corner of YouTube — might these days seem vaguely comic.

Yet the film Mr Blair chose to star in was actually something far more sinister: a cynical exercise by its president in the very ugliest brand of political propaganda.

Why? Because the president of Kazakhstan whose time in office it sought to celebrate was Nursultan Nazarbayev, a despotic former communist who ruled the country with an iron fist from 1990 until 2019, when he installed a pal as ‘puppet’ leader.

Nazarbayev’s regime was famed (and feared) for murdering and imprisoning opponents, shutting down opposition news outlets and siphoning billions of his large and resource-rich nation’s assets to a dodgy network of cronies and family members. 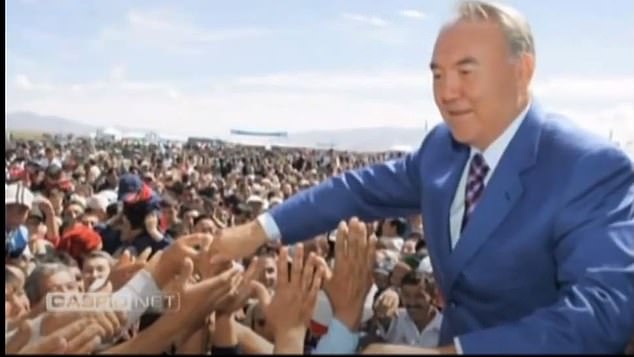 Nazarbayev’s regime was famed (and feared) for murdering and imprisoning opponents, shutting down opposition news outlets and siphoning billions of his large and resource-rich nation’s assets to a dodgy network of cronies and family members

Like all good despots, he simultaneously enjoyed a life of almost unimaginable luxury.

On one occasion — coincidentally just after In The Stirrups Of Time was released — Nazarbayev chose to pay rapper Kanye West more than £2 million to perform at his grandson’s wedding.

At the time, the average annual income of a Kazakh citizen was about £5,000.

The U.S. State Department has accused him of ‘pervasive corruption, torture, restrictions on freedom of speech, arbitrary arrest and discrimination and violence against women’.

And his malign influence continues to this day, for, before retiring, the notorious autocrat installed loyalists and relatives in all the key offices of government. He is now chairman of the country’s security council.

On Thursday, as Russian troops were brought in to quell protests against Nazarbayev’s continued hold over Kazakhstan, the interior ministry boasted that dozens of opposition activists had been ‘liquidated’ and more than 2,000 had been arrested.

After a statue of the old despot was torn down, at least 30 pro-democracy campaigners were killed by police and 1,000 were injured. According to unconfirmed reports, the victims included a 12-year-old child. 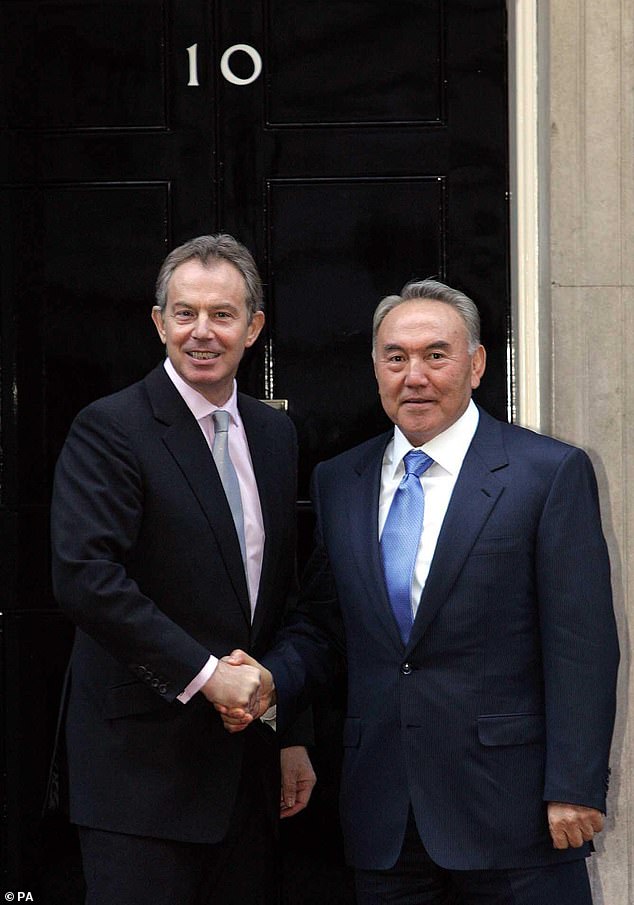 On Thursday, as Russian troops were brought in to quell protests against Nazarbayev’s continued hold over Kazakhstan, the interior ministry boasted that dozens of opposition activists had been ‘liquidated’ and more than 2,000 had been arrested. Pictured: Blair and Nazarbayev outside Downing Street

All of which raises an obvious question: why did a statesman of Tony Blair’s standing agree to give the appearance of helping to launder the reputation of this vile dictator? What possessed a former Labour Prime Minister to front a propaganda film for a famously murderous and corrupt regime?

The most likely answer is quite simple: money.

From 2011 until 2015, our former PM worked as a consultant to the notorious despot, offering ‘leader to leader’ advice and helping to present his autocracy as a ‘remarkable success story’ to the world.

In return, Mr Blair’s companies were paid tens of millions of pounds. And this tawdry arrangement was just one of several such deals struck by Blair with a variety of countries and companies during a frantic nine-year period after he left Downing Street in 2007.

During that time, he gained an extraordinary notoriety for, in the words of one commentator, enriching himself in corners of the world that ‘appeared to have an aversion to democracy’.

It was not until 2016 that he gave up the most contentious commercial work.

From 2011 until 2015, our former PM worked as a consultant to the notorious despot, offering ‘leader to leader’ advice and helping to present his autocracy as a ‘remarkable success story’ to the world

To be fair, Blair has since made some admirable contributions to public affairs, particularly during the Covid-19 pandemic. But baggage from that era still tarnishes his reputation.

Controversial former clients of what critics dubbed ‘Blair Inc’ can be found everywhere from Kuwait — where he earned £27 million over four years from advising its ruling monarchy on ‘good governance’ — to Azerbaijan, whose despotic leader Ilham Aliyev was famously likened by American diplomats to Sonny Corleone, the monstrous mobster in the Godfather films.

He also earned a shilling in such bastions of democracy as Mongolia, the United Arab Emirates and communist Vietnam, and in various other shady corners of Africa, Asia and the Middle East.

In one of several morally questionable deals, the long-standing climate-change campaigner even agreed for his firm to be paid £41,000 a month to lobby for PetroSaudi International, a fossil fuel company founded by members of the Arab theocracy’s head-chopping Royal Family.

The arrangement also gave him a 2 per cent cut of any commercial deal he brokered.