The Pearl Harbor story is fake news, and so is much of the news about U.S. wars 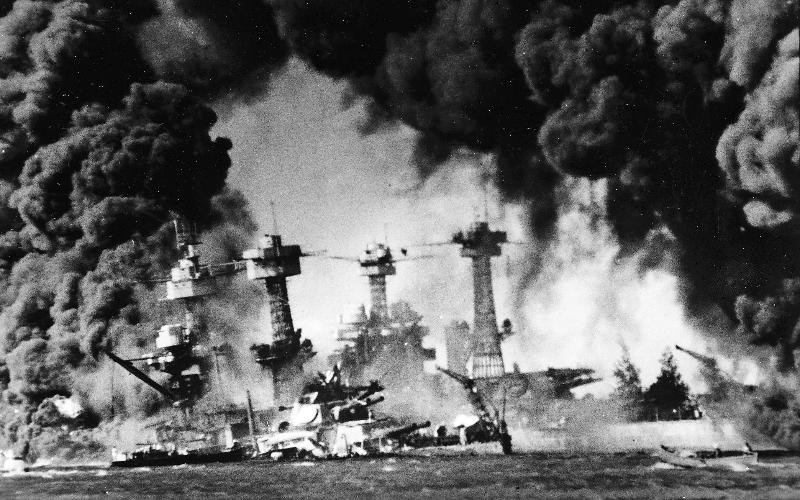 There is a lot of talk about “fake news” of late, with the establishment blaming a so-called proliferation of false stories on Russian propaganda or alternative news sites. But the real purveyor of fake news is and long has been the U.S. government and establishment media.

One of the biggest fake news stories of the last 100 years is the story – taught to American school children from early on and repeated ad nauseum without inquiry by the mainstream media — that Pearl Harbor was a “sneak attack” that caught America totally unawares because the Japanese were engaging in duplicitous peace negotiations, forcing the U.S. into World War II.

President Franklin D. Roosevelt was itching to get into the second Great War, but the American public –with the horror of the “War to end all wars” still fresh —  was strongly against American intervention. So Roosevelt set about goading both the Japanese and Germans – neither of which wanted to tangle with America.

The plan to entice a Japanese attack began in October 1940. Knowledge of the plan was limited to a few select loyal military and naval intelligence officials and handful of trusted members of the Roosevelt administration. It is outlined in the McCollum memo – aka the Eight Action Memo — written by Lt. Commander Arthur H. McCollum, who provided Roosevelt with intelligence reports on Japan and oversaw every intercepted and decoded Japanese military and diplomatic report destined for the White House.

McCollum’s plan kicked into action on October 8, 1940, one day after the memo went to Roosevelt, and continued even while Roosevelt was telling the American public, “Your boys are not going to be sent into any foreign wars.”

The eight action items for provoking Japan were these:

The last step in the plan was completed on July 26, 1941. In truth, the U.S. essentially declared war on Japan with its embargo. Any embargo enforced at the point of a gun is an act of war.

Pacific Fleet Commander Admiral James O. Richardson opposed FDR’s orders to station the fleet at Pearl, so FDR replaced him with Admiral Husband E. Kimmel in February 1941. FDR also placed, without Kimmel’s knowledge, Admiral Walter S. Anderson of the Office of Naval Intelligence as Kimmel’s third in command at Pearl Harbor and assigned him to supervise the radio intercept operation there.

Anderson, upon his arrival at Pearl Harbor, established his personal housing well away from the harbor on the other side of the mountain, giving him safety from the looming attack.

American intelligence learned in January 1941 that if hostilities broke out, the Japanese had decided to initiate a surprise attack at Pearl. It also learned that spies were making bombing maps of Pearl Harbor, but kept this information from Kimmel and the FBI.

American intelligence tracked the Japanese fleet through radio intercepts as it headed toward Pearl Harbor. On November 22, Admiral Royal E. Ingersoll issued a “Vacant Sea” order to clear all shipping out of the path being taken by the Japanese navy and, on November 25, ordered Kimmel to withdraw his ships patrolling the area from which the Japanese attack would take place. In the days before the attack, Chief of Naval Operations Admiral Harold Stark (who was part of FDR’s circle and in on the plot) ordered Kimmel to move his aircraft carriers along with a large escort of the most modern ships to deliver planes to Midway and Wake Islands, leaving behind an enticing target of ships – though only the older WWI vintage ones – in Pearl.

In his magnum opus titled “Freedom Betrayed: Herbert Hoover’s Secret History of the Second World War and Its Aftermath,” finally published in 2011, Hoover tells of the many diplomatic overtures the Japanese made to fend off hostilities. These FDR rejected outright.

Hoover then quotes from “Wedemeyer Reports!,” a book by General Albert C. Wedemeyer, a major in the War Plans Division of the Army stationed in Washington at the time of the attack:

When, on December 6, our intercepts told us that the Japanese were going to strike somewhere the very next day, whether in the Central Pacific or to the south in the Philippines and Dutch East Indies the President of the United States… could have gone on the radio and broadcast to the wide world that he had irrefutable evidence of an immediate Japanese intention to strike. This would have alerted everybody from Singapore to Pearl Harbor. Even though inadequate in some cases to defend effectively, nevertheless our forces would have been able to take a toll which would have blunted the Japanese attack. In Hawaii, the capital ships might have been moved out of the congested harbor to sea, where Admiral Kimmel had at least had the foresight to keep the far more vital aircraft carriers. Furthermore, our carrier task force in the mid-Pacific might have attacked the Japanese task force when its planes were aloft. There are many possibilities which would have given our men at least a fighting chance.

Wedemeyer also writes that “On December 4, 1941, we received definite information from two independent sources that Japan would attack the United States and Britain but would maintain peace with Russia.”

So FDR sacrificed much of the Pacific Fleet and worse still, 2,403 Americans killed and 1,178 wounded to get the U.S. into the war.

Then, after American victories at Midway and Coral Sea, the Japanese fleet was so crippled that offensive operations were no longer possible and there was no longer any chance of a Japanese invasion of the U.S. mainland, yet the administration still went through with its unlawful internment of West Coast Japanese Americans.

Other fake news as told by the American government and parroted by the MSM to drag (or attempt to drag) the U.S. into war include – but are not limited to – Fort Sumter, “Remember the Maine,” Gulf of Tonkin, Jessica Lynch, weapons of mass destruction in Iraq, Pat Tillman and chemical weapons attacks by Syria.

The real fake news sites — the mainstream media — will not tell you truths such as this.

I’ve often wondered if “The Greatest Generation,” would have been so ready to sacrifice themselves for Roosevelt’s bankster war if they had known the truth  about Pearl  Harbor and that Roosevelt and the communists in his State Department were bargaining away half of Europe to Josef Stalin and communist totalitarianism while they were fighting and dying in the South Pacific, North Africa and Europe.

Sources: Freedom Betrayed: Herbert Hoover’s Secret History of the Second World War and Its Aftermath, edited and with an introduction by George H. Nash.