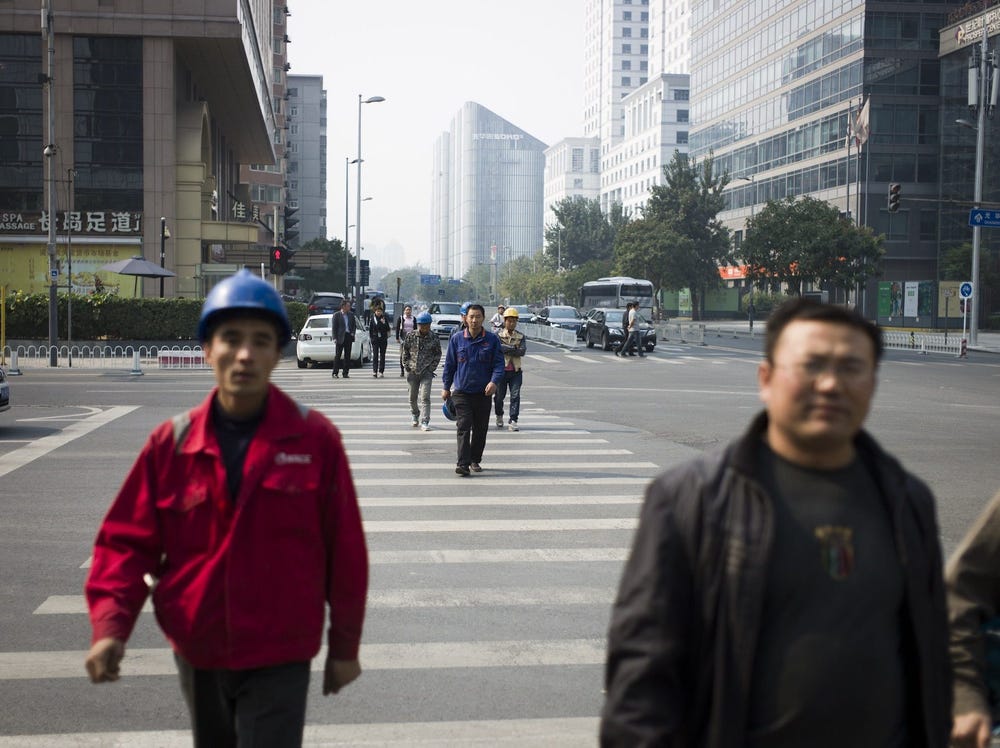 Get a daily selection of our top stories based on your reading preferences.

The Chinese Communist Party has been constructing a moral ranking system for years that will monitor the behavior of its enormous population — and rank them all based on their “social credit.”

The “social credit system,” first announced in 2014, is “an important component part of the Socialist market economy system and the social governance system” and aims to reinforce the idea that “keeping trust is glorious and breaking trust is disgraceful,” according to a 2015 government document.

The rankings are decided by China’s economics planning team, the National Development and Reform Commission (NDRC), the People’s Bank of China, and the Chinese court system, according to the South China Morning Post.

The system can be used for individual people, but also for companies and government organizations. The private sector, including the burgeoning tech world in China, has their own non-governmental scoring systems that they implement, as Wired reported.

For example, Sesame Credit, which is owned by Jack Ma’s Ant Group, uses its own unofficial scoring system for its employees, such as studying shopping habits, according to the think tank Merics.

The program has been piloted for millions across the country in recent years, as CNBC reported, and was expected to become fully operational and integrated by 2020. But at the moment the system is piecemeal and voluntary, though the plan is for it to eventually be mandatory and unified across the nation, with each person given their own unique code used to measure their social credit score in real time, per Wired.

Like private credit scores, a person’s social score can move up and down depending on their behavior.

The exact methodology is a secret — but examples of infractions include bad driving, smoking in non-smoking zones, buying too many video games, and posting fake news online, specifically about terrorist attacks or airport security.

The punishments can come in a few forms, like travel bans, slow internet, and being banned from higher education

China has already started punishing people by restricting their travel, including banning them from flights.

Authorities banned people from purchasing flights 17.5 million times by the end of 2018, according to the National Public Credit Information Centre, as the Guardian reported.

They can also clamp down on luxury options — many are barred from getting business-class train tickets, and some are kept out of the best hotels.

The eventual system will punish bad passengers specifically. Potential misdeeds include trying to ride with no ticket, loitering in front of boarding gates, or smoking in non-smoking areas.

According to Rachel Botsman, an author who published part of her book on tech security on Wired in 2017, the government will throttle your internet speeds as a punishment, though the exact mechanics still haven’t been made clear.

According to Foreign Policy, credit systems monitor whether people pay bills on time, much like financial credit trackers — but also ascribe a moral dimension.

You or your kids could also miss out on the best jobs and schools — seventeen people who refused to carry out military service in 2017 were barred from enrolling in higher education, applying for high school, or continuing their studies, Beijing News reported.

And in July of 2018, a Chinese university denied an incoming student his spot because the student’s father had a bad social credit score for failing to repay a loan.

You could also get your dog taken away. The eastern Chinese city of Jinan started enforcing a social credit system for dog owners in 2017, whereby pet owners get points deducted if the dog is walked without a leash or causes public disturbances.

Those who lost all their points had their dogs confiscated and had to take a test on regulations required for pet ownership.

Naming and public shaming is another tactic. A 2016 government notice encourages companies to consult the blacklist before hiring people or giving them contracts.

People will be notified by the courts before they are added to the list, and are allowed to appeal against the decision within 10 days of receiving the notification.

Li Xiaolin, a lawyer who was deemed “untrustworthy” after not fulfilling a court order in 2015, was placed on the list and was unable to purchase plane tickets home while on a work trip, Human Rights Watch reported. He also couldn’t apply for credit cards.

This video, posted by freelance journalist James O’Malley, includes an example of an announcement on a bullet train from Beijing to Shanghai warning people not to misbehave — or else their “behavior will be recorded in individual credit information system.”

People with good scores can speed up travel applications to places like Europe, Botsman said.

An unidentified woman in Beijing told the BBC in 2015 that she was able to book a hotel without having to pay a cash deposit because she had a good score.

Citizens with good social credit can also get discounts on energy bills, rent things without deposits, and get better interest rates at banks.

These perks were available to people in Rongcheng, in Eastern China, where the city council rolled out a social credit system for its citizens featured in Foreign Policy in 2018.

China’s social credit system incorporates a moral edge into the program, which is why many have compared it to some level of dystopian governance, such as in George Orwell’s “1984” in which the state heavily controls every aspect of a citizen’s life.

But despite that — Human Rights Watch called the system “chilling,” while Botsman called it “a futuristic vision of Big Brother out of control” — some citizens say it’s making them better people already.

A 32-year-old entrepreneur, who only gave his name as Chen, told Foreign Policy in 2018 that “I feel like in the past six months, people’s behaviour has gotten better and better. For example, when we drive, now we always stop in front of crosswalks. If you don’t stop, you will lose your points. At first, we just worried about losing points, but now we got used to it.”